Improved Quality and Effectiveness of Engineering Organization by Introducing Jitera

GMO-Z.com RUNSYSTEM has been working on several projects using the Jitera development platform since 2021, including developing an application with over 100 screens in two months.

Demand for software development was so high that we could not meet it and had to turn it down.

When the activities switched online in the world due to the impact of the coronavirus epidemic, the need for software development rapidly increased, and GMO-Z.com RUNSYSTEM saw a sharp increase in inquiries. The rise in lead customers led to increased orders and sales, and we could take advantage of a business trend we had yet to plan.

As a result, there were an increasing number of projects that we had to turn down because we couldn't handle them. We needed to manage the quality of our development team and think about how to meet the high demand. 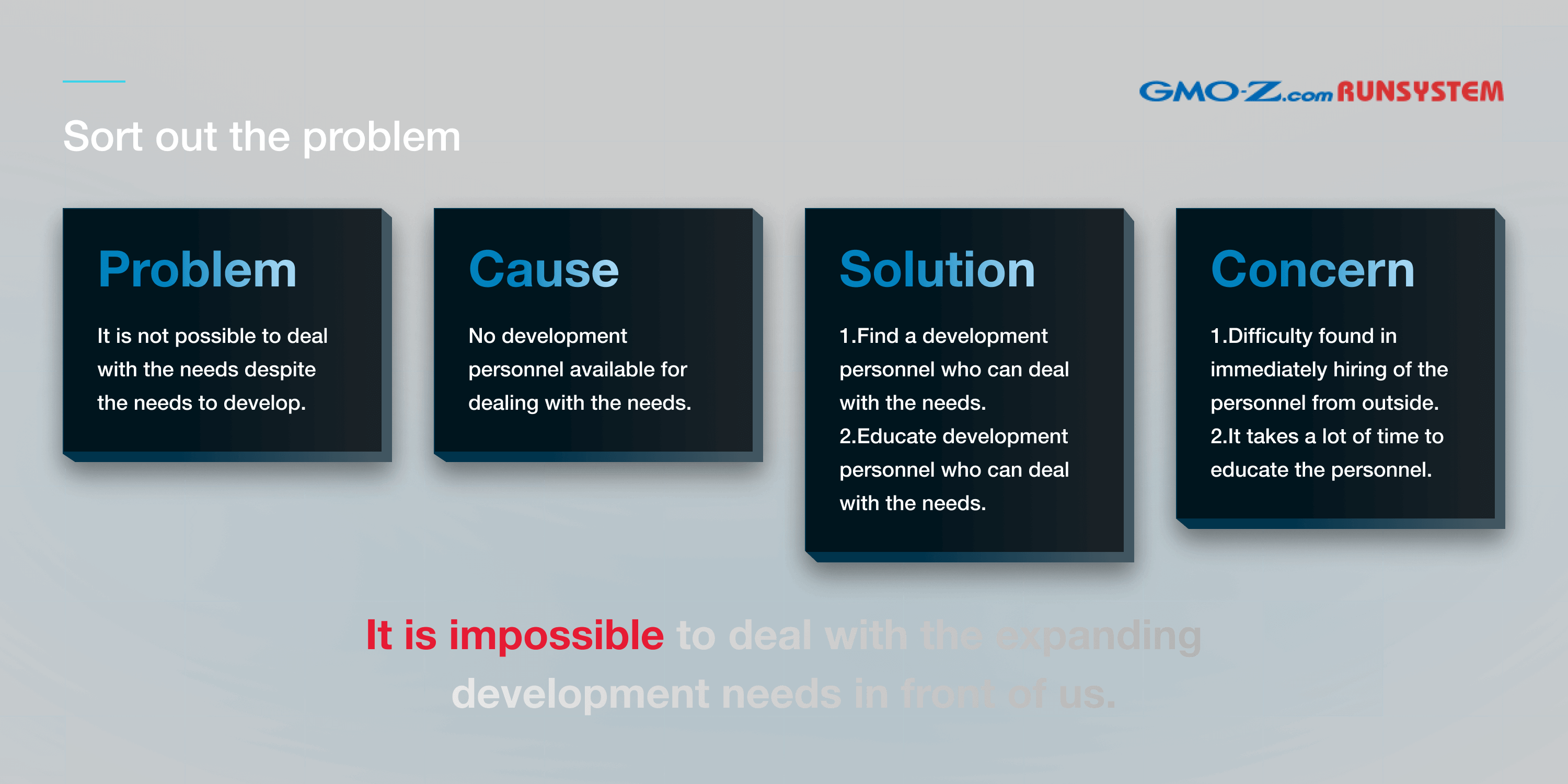 "Automation" solution to meet the increasing demand for software development.

In this context, we launched our partnership with Jitera and began software development using the Jitera development automation platform.

With Jitera, you can develop while generating clean source code, which is considered the best practice in programming languages and frameworks. There is no vendor lock-in and technical constraints, so customizability is no different from full-scratch development. 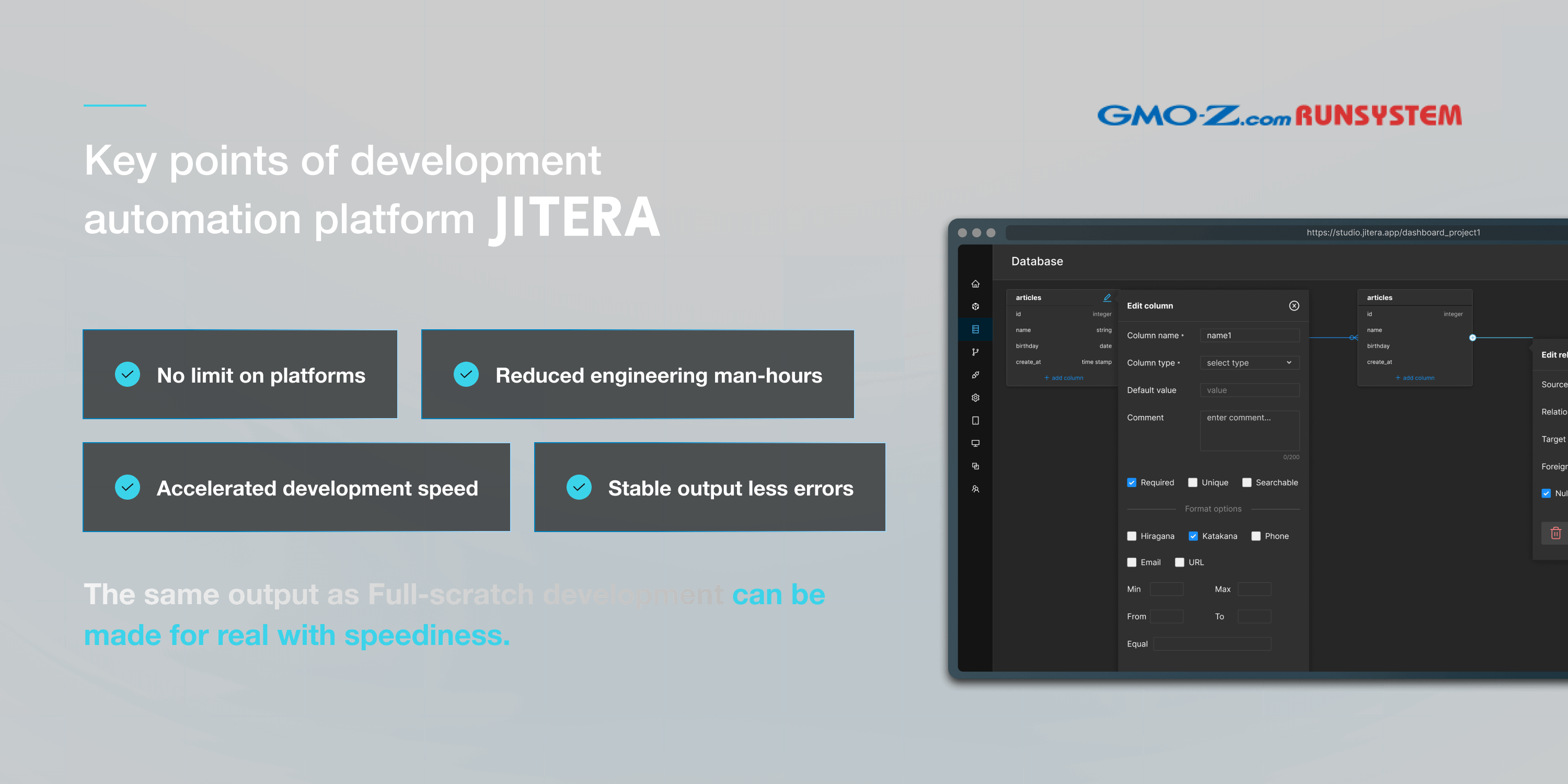 Successfully achieved both speed and quality in development

Mr.Trung, a project manager at GMO-Z.com RUNSYSTEM, describes the benefits of Jitera as "It solved the challenges of securing resources and balancing speed and quality in development.

“Thanks to Jitera, we can now take on projects we could not before.”

Jitera's code exports significantly reduce the workload of the engineers we used to deal with, so we have increased the amount of work we can take on while keeping our workload the same.

"For example, in most cases, the environment for a typical project may take several days to a week to build, but Jitera has already built the environment. Also, the logic and APIs for creating, reading, updating, and deleting data are created in Jitera before the project starts, so there is noticeably less code to write."

Not only is the speed of development increased, and we can handle more projects, but we are also receiving feedback on quality.

“The amount of work we used to do is now automated, and the development speed is much faster with Jitera. I think that high-level engineers designed Jitera and produced high-quality code.”

What is the unexpected effect of Jitera that allows you to focus on the work you need to do?

The feedback from engineers on site has also been positive, Mr.Trung says.

“The engineers have a reputation that Jitera’s exported code is very easy to read. When using Jitera, you join development with the code already written, but it is easy to catch up on the code, and the project is up and running quickly. One of the advantages of using Jitera is that you can start development without stress! “

Mr.Trung says he also feels that Jitera has other unexpected side effects.

“I feel that engineers can now focus on the work that needs to do," Mr.Trung says. Experienced engineers can focus on a highly important development, and for inexperienced engineers, it's easier to read code and catch up while fine-tuning and helping. There's a sense that it's also helping with education and training since there are more opportunities on-site." 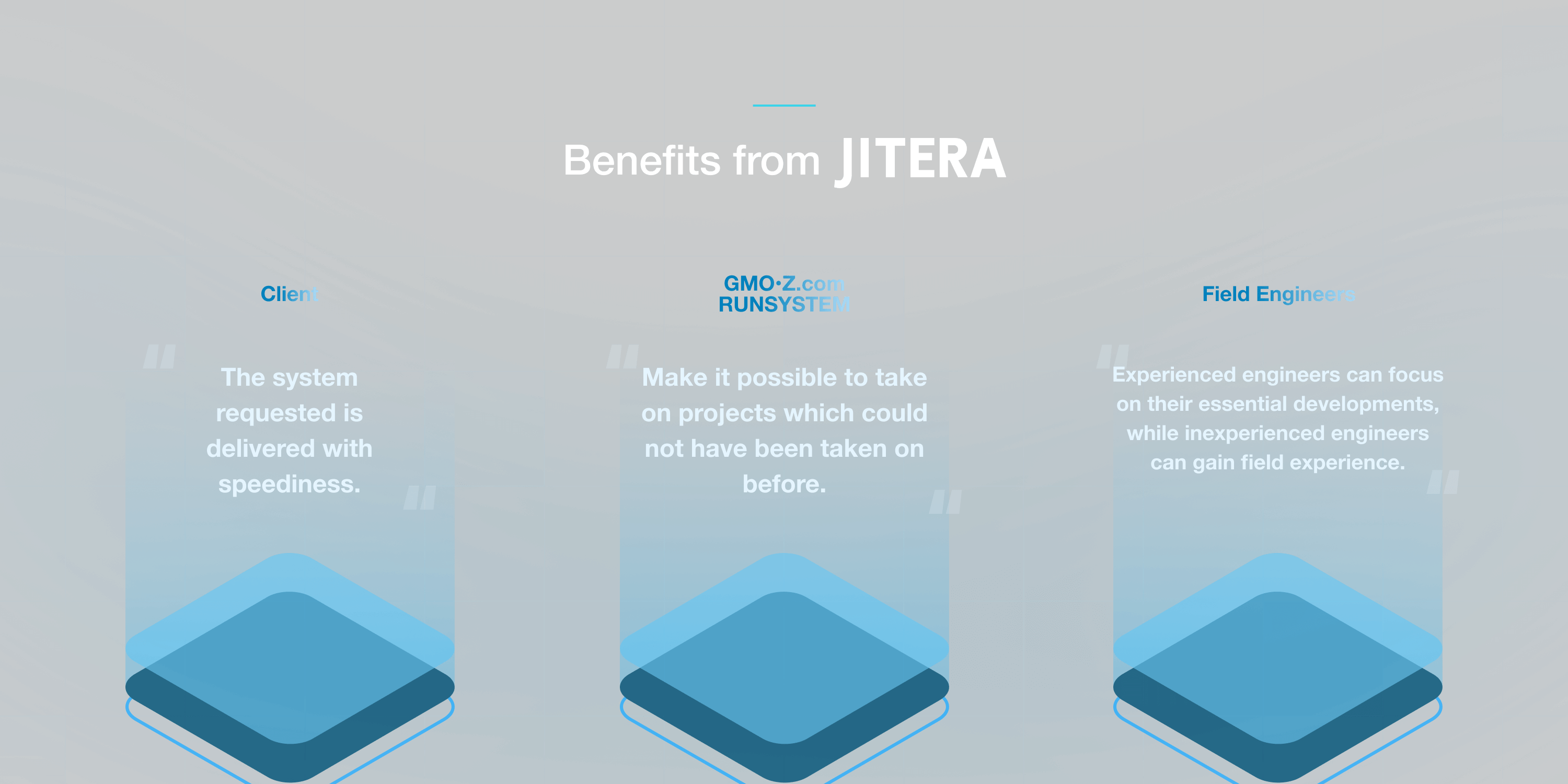 Releases achieved because of Jitera.

In developing a mobile application for a marketplace, the scale of the application was 100 screens in total, including the administrator’s screens. Still, the development was completed and delivered in about two months. We also developed a social networking application for a new business of a company listed on the First Section of the Tokyo Stock Exchange in a little over a month.

We would not have accepted order these projects without Jitera, given the development resources and timelines.

Mr.Trung also says, "Jitera is improving, and the scope of the automated code seems to have expanded a lot compared to what it was at the beginning.

As a new approach to the accelerating demand for software development, Jitera's products will also evolve with the growth of the GMO-Z.com RUNSYSTEM company using development automation.

Have a project in mind?

Engineers, designers, and business professionals work together to accelerate a winning business.

Build the Next Era of Software Development.

Build the Next Era of Software Development.